LOUIE'S LIGHTNING (PB, Disability Subject, back matter)
​Louie's lightning–his seizures–leave him wishing for freedom from the watchful eyes of worried adults. When Louie meets epilepsy dog Valentine, a rainbow of hope spreads across the horizon.
Comps: RESCUE & JESSICA x I TALK LIKE A RIVER

RORY'S RAINBOW (PB, Disability Subject, back matter)
Rory feels rip-roaring ready for kindergarten, until he arrives in Ms. Green’s rainbow-themed classroom. Certain that his colorblindness means he’s destined for failure, Rory will have to learn that seeing the good in himself–and others–is the key to passing kindergarten with flying colors.
Comps: ERIK THE RED SEES GREEN x I WILL NEVER GET A STAR ON MRS. BENSON'S BLACKBOARD

OPERATION: ISOLATION (PB, Action, Humor)
When Leo’s parents scheme to make him share his fortress of big-kid glory (aka his bedroom) with an infiltrator (aka his little sister), he draws up plans for OPERATION: ISOLATION. But when his mission falters and bath time looms on the horizon, Leo and sis make the best of the situation. Operation: Cooperation is only just beginning.
Comps: NINJA x THE MIDNIGHT CLUB

THE LITTLE LLAMA THAT COULD (PB, Rhyming spin on a classic, STEM back matter)
One scootering llama with sights set on the heights.
A gaggle of tag-along friends.
To reach the summit before sunset, they’ll need the perfect camelid cruising machine:
a lengthy, luxurious...
STRETCH LLAMASINE!
Comps: NINJA RED RIDING HOOD x ROOM FOR EVERYONE

LOVE, LOVEY (PB, Humor, Epistolary)
When Lovey gets left behind at a cousin's house, he sends telepathic messages to ensure Boy that he's juuust fine. But despite his bravado, maybe he can only take so much big-kid play.
Dear Boy, Send help.
LOVE, LOVEY.
Comps: LOUIS x KNUFFLE BUNNY FREE

LIGHTNING AND THE STUN-DERSTORM (PB, Rhyme, Humor, Author-Illustrated, STEM back matter)
Thanks to a trickster older brother and an ill-timed lightning strike, Lightning the fledgling firefly thinks his lantern has caused a STUNderstorm. If he can face his fears, he’ll learn the magical power of the FUNderstorm.
Comps: ROT, THE BRAVEST IN THE WORLD x THUNDER TRUCKS
​
FARMER AND THE BOT (PB, Humor, STEM back matter)
Fritz has a new robot farmhand! Before long, Bot is...
tractor driving!
scare-crowing!
Knitting?! Dancing!?
SWIMMING?!
Fritz could get a refund, but that hunk of junk has really tinkered with his heart.
Comps: A UNICORN NAMED SPARKLE x LOVE, Z

YAK AND THE BEANSTALK (PB, Rhyming spin on a classic, STEM back matter)
A magic beanstalk transports Yak to a marmot-filled paradise in the sky. But--Fee, Fie, Fiddle-de-fum: a giant is capturing marmots to make a fur coat. Yak will have to pluck his courage to find a solution that will warm the giant's heart.
Comps: THE GREAT GRAN PLAN x EXTRA YARN

THE NEST QUEST (PB, Informational fiction, dummy in progress)
Martha the mason bee arrives in Pollen-Nation with a to-do list a mile long. At the top: Find a Home. When all housing options are duds, she'll have to spring-break-a-sweat to open up the Mason Bee-N-B before the flowers fade.
Comps: MY STINKY SUMMER BY S. BUG x THE HONEYBEE

GHOST TOWN: A PARK FOR SPARK (Illustrated Chapter Book Series (5500 words), Humor, Community Activism themes)
Fanny McPhantom moves to Ghost Town with her family and sees some room for improvement. Step one: build a playground for her little brother Spark to enjoy. But Mayor Spookmont is dead-set against any fun and frivolity. Fanny will have to enlist the help of the mayor's son, Chaz, to petition the community and find a solution that's terror-ific for everyone.
Comps: THE SUPER HAPPY PARTY BEARS, LAYLA AND THE BOTS

M.C. EDDIE: THE BREAK-DANCING BURGLAR (Lower Grade Graphic Novel (1000 words), Humor)
Chanting and cha-cha-ing Eddie the raccoon sets out to raid the neighborhood’s best–and most barricaded–garden, but is delayed at every turn by other animals who have fallen victim to the evil gardener’s pest control devices. Saving them is too easy for Eddie, but when his bragging song and dance sends him into a booby trap, he’ll need the help of his new friends if he wants to survive to scavenge another night.
Comps: BORIS ON THE MOVE, SUPER RABBIT BOY

THE MERMAID GUIDE TO MARS (Early Middle Grade series (15,000 words), Adventure, Science Fiction)
Eleven-year-old mermaid Essie keeps her beloved copy of THE MERMAID GUIDE TO MARS tucked inside her finny pack at all times. She just knows that if she follows every rule within, she will pass her entrance exam into MARS, the Mermaid Academy of Rocketry and Space, and will be one step closer to joining her mother on her space missions. But then Essie’s mom winds up trapped in the caverns of the planet Mars and sends one final message: Send Essie. Essie must ditch the rulebook and follow her fin-stincts instead, even if it means being barred from space--and MARS--forever. 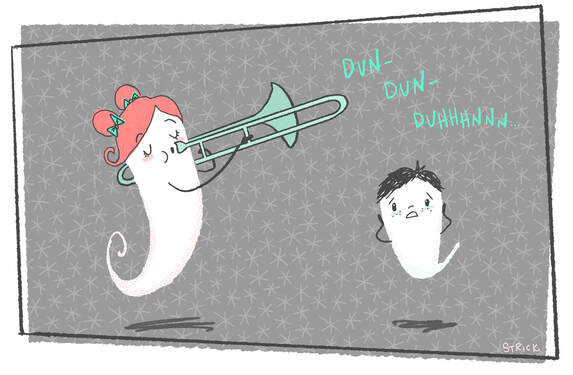 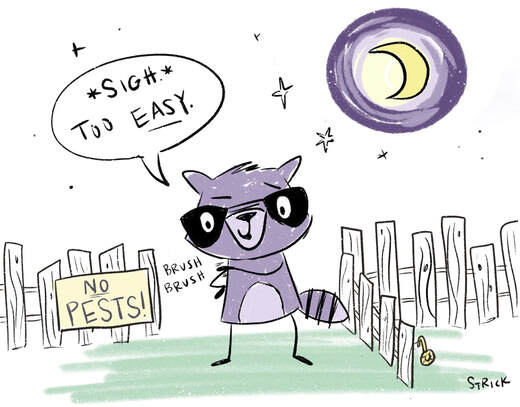 ​From my picture book dummy, LIGHTNING AND THE STUN-DERSTORM: 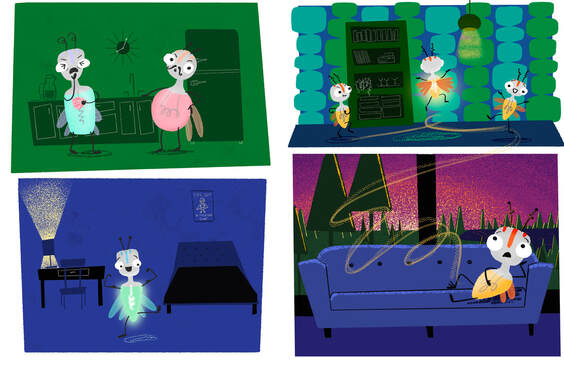 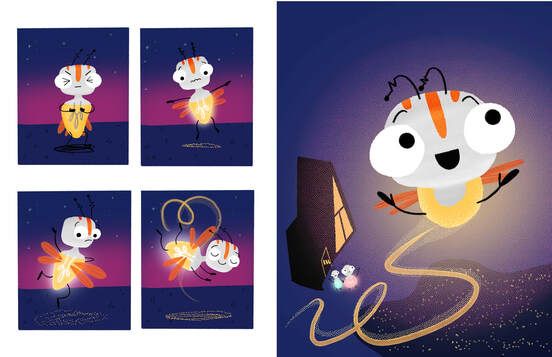 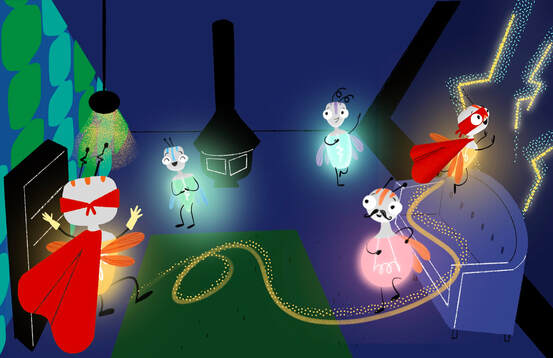 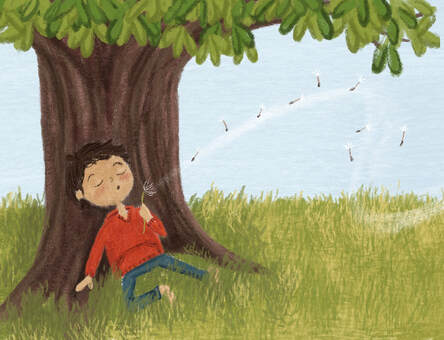 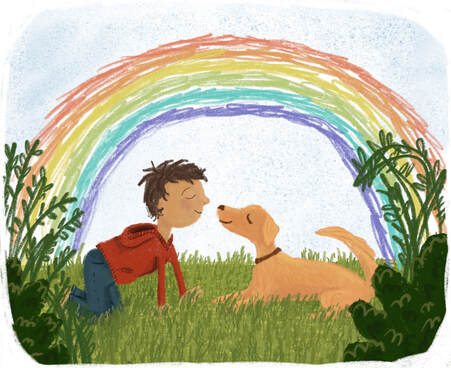 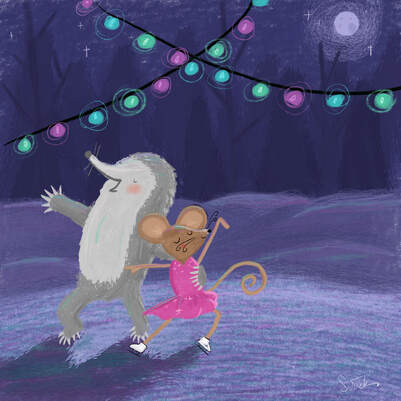 Playing with graphic storytelling
Other characters and doodles: 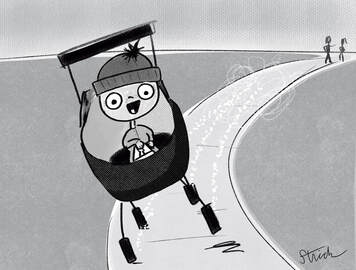 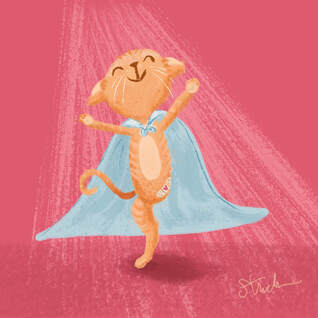